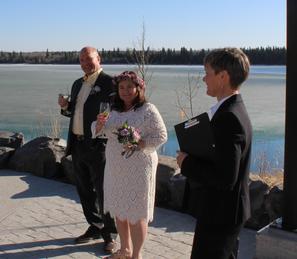 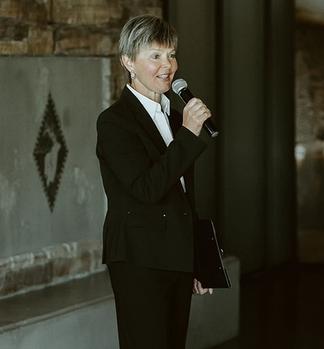 We need a Justice of the Peace (JP) to marry us.

Actually, you don't.  That only happens in the movies.

(aka; a Marriage Officiant).

What is a Marriage Commissioner?

A Marriage Commissioner (officiant) is a person with the legal authority

to perform marriages within the province of Alberta.

What is the difference between a religious or civil ceremony?

When getting married, a couple may choose a religious or civil ceremony.

Can't we just get married at City Hall?

I suppose you could  get married in the lobby of City Hall but you still need to arrange for a Marriage Commissioner.  The City of Calgary does not staff Marriage Commissioners nor provide space.  And depending on the size of your group, security may have something to say.

How far in advance should I book a Marriage Commissioner?

The summer months are very popular and weekends in particular fill up fast.  Couples book up to a year in advance to ensure they get the Commissioner they want.  I would suggest booking your Commissioner as soon as you know your date and time to avoid disappointment.  Depending on my schedule, I can be booked 24 hours in advance if needed.

Do I need to be an Alberta resident to get married in Alberta?

No. You do not need to be an Alberta resident to get married in Alberta.  But you need to get an Alberta marriage licence from a Registry and you and your witnesses must be physically present in the province of Alberta for the ceremony.

We are considering a destination wedding. Do we still need an Alberta marriage licence?

Your Alberta marriage licence is only valid for ceremonies in Alberta.  It can be difficult to familiarize yourself with the marriage requirements at your destination, so many couples opt to be legally married in Alberta prior to their destination ceremony.  For example, some states do not allow gay marriage. Likewise, some countries may have residency requirements for couples wishing to marry. A legal marriage in Alberta prior to your departure can help to eliminate any surprises on your big day.

What is a marriage licence?

How long is a marriage licence valid?

A marriage licence is valid for three months from the date of issue.

What is a marriage certificate?

Following your wedding ceremony, the completed marriage licence will be submitted to

Alberta Vital Statistics by the Marriage Commissioner.  If you want a marriage certificate

which is a legal document issued by Alberta Vital Statistics, you must apply for it at an Alberta

registry agent office and it will be mailed to you in approximately 3-4 weeks.   You can apply

for your marriage certificate anytime after the ceremony (i.e., 1 week, 1 year, 10 years,

etc.). Marriage certificates are not automatically mailed to you.  If you do not apply for a marriage certificate you are still legally married but nothing will come to you from the government unless you initiate it.

What if we are in a rush to have our paperwork completed?

If there is a rush to have your marriage registered, it is possible to have your Marriage Commissioner rush register your completed marriage licence.  Doing so reduces the wait time by approximately two weeks.